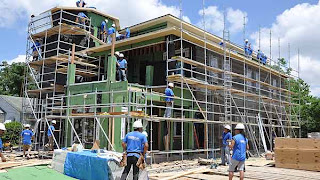 The work kicked off in Houston 7/26 for ABC’s top show “Extreme Make Over Home Edition” as HHN Homes began the daunting task of completing a 4,400 Square foot home in only 7 days.

The Houston family picked to receive the new home was chosen for their selfless acts of kindness. 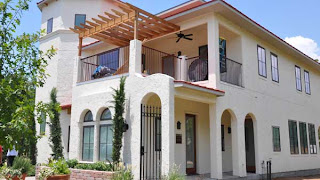 The Johnson family, Eric and Elaine Johnson and their five daughters, lived in their 1 bedroom home in southeast Houston. The 720-squarefoot house was severely damaged by Hurricane Ike and suffered from rotting floors and the structural damage throughout the house.

Even though their own home was literally falling apart the family was a support system to their community giving away food and money to help their neighbors.

“They do a lot of things, you know. They’ll bring kids in off the street and feed them, they’ll take families away on days out,” said designer Ed Sanders with ‘Extreme Makeover: Home Edition.’ “They’ll take street kids that are just running the streets, they’ll pick them all up and take 18 of them out to a water park for fun. They’ll pay for it. And these guys don’t earn a lot of money. That’s what I think is amazing about finding families like this.”he new home was constructed by Houston-based HHN Builders and designed with this family’s specific needs in mind. Factory Builder Stores donated an entire kitchen suite of Jenn-Air Pro Series appliances giving the family a top-notch kitchen to prepare their meals for family and community.

Factory Builder Stores Kitchen Specialist, Heather Coble who worked on installing the homes kitchen cabinets says, “By the end of the day we were all exhausted but it was great to see everyone work together to finish the house. The best part was getting to yell ‘Move that Bus’ and see the families face as they saw their new for the first time”

Use this form to find things you need on this site

Factory Builder Stores no longer requires appointments to visit one of our showrooms during standard operating hours.

FBS is still taking all necessary precautions by sanitizing common surfaces on a daily basis and requiring our employees to continue to wear masks. Customers are encouraged to wear a mask too, though they are no longer required to enter the showroom.

Walk-in’s are welcomed, but if you prefer to make an appointment, call your closest location [showroom information found on this page].