Best of the Brazos Valley 2010

Factory Builder Stores nominated for ‘Best of the Brazos Valley 2010’

Factory Builder Stores College Station location has been nominated for the ‘Best of the Brazos Valley 2010’ in the ‘Best Appliance Store’ category. 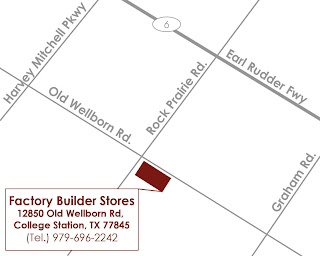 Use this form to find things you need on this site

Factory Builder Stores no longer requires appointments to visit one of our showrooms during standard operating hours.

FBS is still taking all necessary precautions by sanitizing common surfaces on a daily basis and requiring our employees to continue to wear masks. Customers are encouraged to wear a mask too, though they are no longer required to enter the showroom.

Walk-in’s are welcomed, but if you prefer to make an appointment, call your closest location [showroom information found on this page].